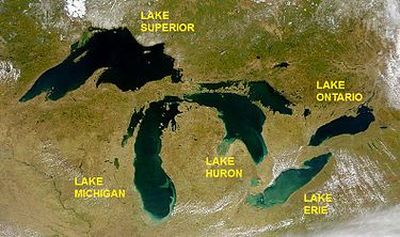 The five Great Lakes, Huron, Ontario, Michigan, Erie and Superior border the United States and Canada.  The state of Michigan is surrounded by four of the five Great Lakes, and is thus called The Great Lake State.  Sometimes the shore of these lakes is referred to as the 4th Coast of North America, because the combined shoreline of the five lakes would stretch halfway around the earth's equator.  The water contained in these lakes makes up 84% of the surface fresh water of North America and 21% of the surface fresh water of the world.  The lakes all lie in their own basin but are interconnected and flow to the Atlantic Ocean via the Saint Lawrence Seaway and the Great Lakes Waterway.

The Michigan name comes from the Ojibwa word Mishigami meaning great water or large lake.  The eastern shore of Lake Michigan has the largest fresh water sand dune complex in the world.  Large dunes are prevalent along the entire western shoreline of Michigan.   The most well-known of these is Sleeping Bear Dunes National Lake shore. Many large dunes continue inland providing ideal soil for growing grapes, blueberries and other fruits giving us a title of the “fruit belt” of Michigan.
Michigan is fifth in the nation in the number of breweries, microbreweries and brewpubs. Michigan is home to Beer City USA – Grand Rapids – as well as beer centric communities such as Kalamazoo, Ann Arbor, Traverse City and others. The state has over 140 craft brew establishments!
Michigan is an outdoor wonderworld! There are trails for bicycling or running/walking, snowmobiling, cross country skiing, etc. There are 3 downhill ski areas in southwest Michigan. We have plenty of rivers for kayaking or canoeing and over 11,000 inland lakes. Lonely Planet chose Grand Rapids and western Michigan as the number one tourist destination in the USA for 2014.

Festivals abound in the summer and fall, celebrating such things as wine, blueberries, cherries, lighthouses and even newly created sand sculptures.  The Tulip Festival in Holland, Michigan each spring brings thousands of visitors to see the flowers and the giant windmill there.  One of the highlights for many visitors is a sail out into the lake on an 1812 replica of the schooner The Friends Good Will. ​ 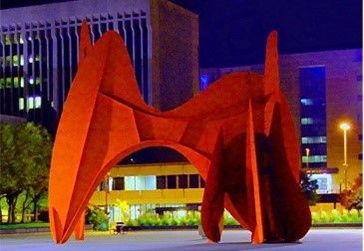 Grand Rapids is the second largest city in Michigan.  The city has a population of about 196,000 but the surrounding communities bring the population to approximately 1,038,000.

Grand Rapids has long been a center for furniture manufacturing and is home to five of the world's leading office furniture companies. In the past it was called the "Furniture City" but now its more common modern nickname is "River City" as it is located along the shores of the Grand River. There are many colleges and universities located in Grand Rapids, including the prestigious Kendall College of Art and Design. Other industries include health care (Michigan State’s medical school is here), information technology, automotive, aviation and consumer goods manufacturing.

Grand Rapids is the hometown of the 38th U.S. president, Gerald Ford. He is buried with his wife, Betty, on the grounds of the Gerald R. Ford Presidential Museum.

Meijer Gardens and Sculpture Park is the place for nature and art lovers alike! In May 2009 it was named one of the top 30 museums to see in the world. Regardless the season the 158 acres of gardens and sculptures are spectacular .

Every year the world’s largest art competition brings art to Grand Rapids in late September for a three week event called ArtPrize.  Here the public can choose the grand prize winner.  There is also a juried winner, but the city comes alive as the public wanders from venue to venue of over 1500 pieces to make their selection.
Watch:      Downtown Grand Rapids     and      Grand Rapids Lipdub 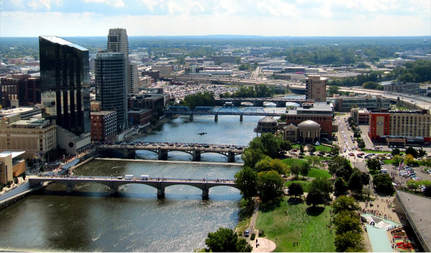 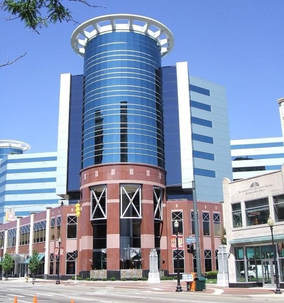 ​Kalamazoo is the second largest city in southwestern Michigan. The city has a population of approximately 75,900, but with the surrounding areas the population is near 335,000.

The city is named for the Kalamazoo River, where it is situated mainly on the southwest bank of a major bend.  There is debate as to where the name Kalamazoo actually comes from.  It is generally thought the name originates in the language of either the Potawatomi or Ottawa peoples who were native to the area at the time of the European settlement.

The common phrase “from Timbuktu to Kalamazoo” resulted from the strange name, and has served to enter it into pop culture, and the name has been used in numerous songs.  Probably the most recognized is “I’ve Got a Gal in Kalamazoo” made famous by the Glenn Miller Orchestra in the 1940s.

Kalamazoo is home to Western Michigan University (WMU), a nationally recognized research institution that has benefited from the local presence of Pfizer pharmaceuticals, and the Eaton and Stryker Corporations. The city is also home to Kalamazoo College (often referred to as “K College”), a private liberal arts school located adjacent to WMU’s campus.

The Kalamazoo Promise:  Because of very generous private donations from several anonymous individuals, every resident graduate of the Kalamazoo Public Schools is provided with a scholarship for up to 100% of tuition costs for four years at any public university or community college in Michigan.

Every other spring the Gilmore International Keyboard Festival brings new and established musicians to Kalamazoo.  Kalamazoo was once the home of Checker Cabs, Gibson Guitars and Shakespeare Rod and Reels.  Though these last two still exist they are now manufactured in other lands. ​
Watch  Discover Kalamazoo 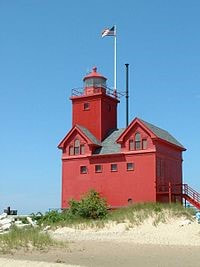 Holland is situated near the eastern shore of Lake Michigan. The population of Holland is approximately 33,000 residents.  Holland was settled in 1847 by Dutch Calvinist separatists who were escaping from persecution in the Netherlands.  At the time, the land was inhabited by the Ottawa people who had been on the lake for hundreds of years.  The native people moved north, under pressure from the new illnesses brought from the settlers.

The city is perhaps best known for its Dutch heritage, which serves not only as part of the city’s cultural identity, but the local economy as well.  the Tulip Time Festival in May and various Dutch-themed attractions augment the nearby Lake Michigan shoreline in attracting thousands of tourists annually. Tulip planting and the festival began in 1930 when 250,000 tulips were planted for the event. Today, 6 million tulips are used throughout the city. DeZwaan, an original 250 year old Dutch windmill, is situated on Windmill Island, a municipal park.

Across the channel from Holland State Park on the shore of Lake Michigan is the Holland Harbor Light, known as “Big Red”.